Mendoza is a city of wide boulevards, street cafes and dappled-light plazas.

Our first morning is spent in the city centre, wandering down pedestrian streets and doing some admin (checking out which cash machines have the best rate, going to the tourist information). We pick up food for a picnic and head to Parque General St Martin, a large park half an hours walk from the centre where there is a lovely lake, formal gardens and trellises and wide roads for the many runners and cyclists. We set up camp in the shade of a tree where we eat our picnic and then head around the lake for a walk. 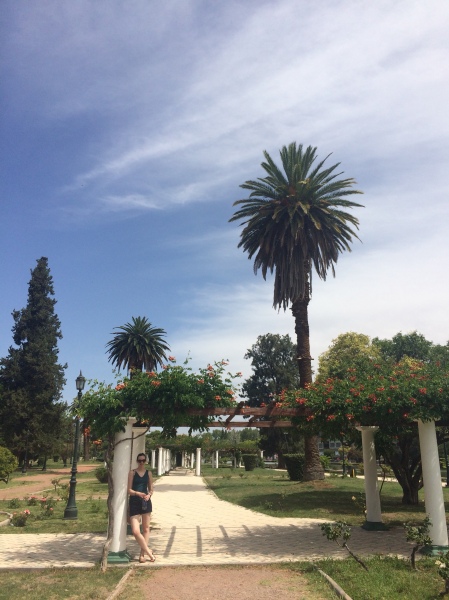 Back at the hostel we have beers and play Yahtzee on the rooftop; the sun goes down around us, the city lights up and there’s the hazy purple ridge of the Andes in the distance.

The main reason many come to Mendoza is for its wines. Lots of sunshine and little rain means that Mendoza has perfect growing conditions for the vibes and, as we later find out, produces 70% of Argentinian wine. We were there to sample the delights.

We catch a bus out of town to a suburb called Maipù where we hire bikes and are given a helmet and a map. Mozza’s bike has gears and is in decent working shape; us girls are given ones with a basket on the front and no brakes. We’ve read it’s going to be 34 degrees so have slathered on the suncream, topped up our water bottles and are reassured that the company come and pick you up if your bike (or you) aren’t in a fit state to make it back to town. We’ve not gone 20 yards when a huge HGV honks at us that we’re going in the wrong direction. 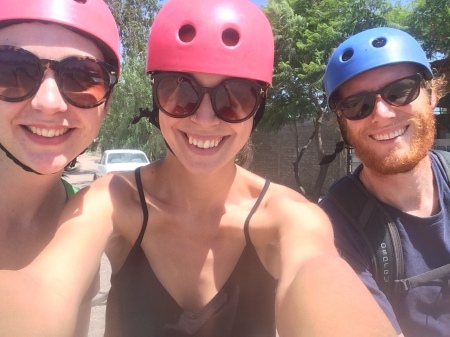 Back on track, we head to our first vineyard, Viña al Cerno, which translates as ‘heart of the oak’. It’s one of the oldest vineyards and is family-run; we’re shown around by one of the daughters of the family and she takes us through the rustic farm and outbuildings, past the old machinery on display and down into the cool wine cellar. Here all the wines are organic and the grapes picked by hand; “we’re a little vineyard but our heart is the biggest” the daughter tells us proudly.

We chose three wines to share and try, spinning them between the three of us. They’re tasty and I like the stories behind each one that represent the members of the family.

We hop back on our bikes and cycle the short distance to Tempus Alba, a totally different type of bodega, very modern and built in limestone, metal and glass. Here, we go on a short self guided tour, reading information off boards, and then head up to the lovely roof terrace which overlooks the vineyards. Here we share a tasting selection of six wines and it feels perfect, sat out in the sun, drinking chatting and enjoying the view. 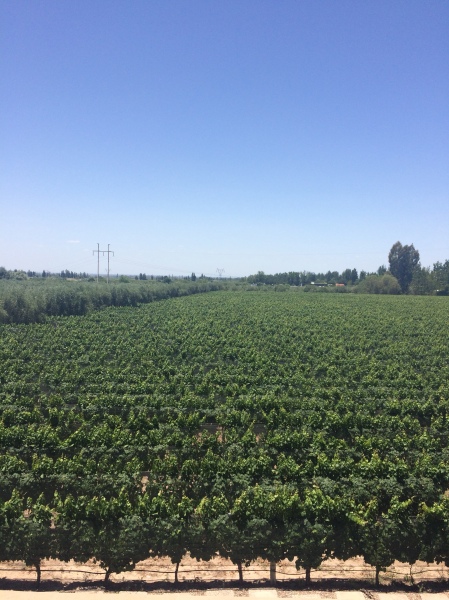 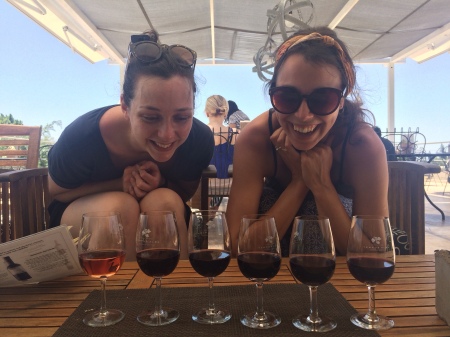 Both Davo and I like the crisp Rosada de Malbec rose and the Syrah whilst Moz likes the Tempranillo the best. (To be honest though, they were al amazing!) 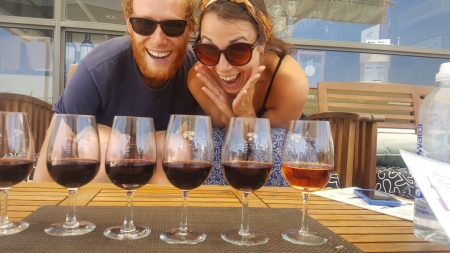 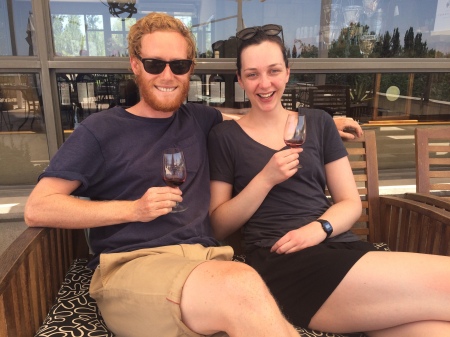 The last stop on our wine tour is the 130 year old Trapiche bodega, one of the oldest and largest in the region. We cycle for about half an hour to reach it, and arrive early, have our packed lunch in the shade of a tree beside the vines.

Heading inside we’re part of a tour group and are given a glass each which we take with us as we go around the tour. The first glass is a delicious white wine called Costa & Pampa, very cold and crisp and refreshing after our hot cycle. We begin outside the main building which houses most of the production, built in renaissance style by Italian workers from the ports in Buenos Aires and a direct replica of a building in Italy.

Inside, in the cool interior, we’re taught about the original production process (manual picking, horse and cart, separating the grapes by hand and squashing them by foot) as well as some of the modern techniques the bodega now uses. Whilst we’re doing this, the guide talks to us about how Trapiche is currently experimenting with how the moon calendar can affect the taste of their wines. First we try wine where the grapes had been harvested on a new moon when water was in the soil, and secondly a wine made from grapes that had been harvested two weeks later when water is in the fruit. I have to admit, I didn’t taste a huge amount of difference (both delicious!) but the idea of the taste being affected by the lunar calendar blew my mind!

We moved upstairs to try a Cabernet Sauvignon, standing in a cavernous room used for housing barrels before shipment. We then moved outside into the hot sunshine to see the railway lines, now long abandoned, which used to transport the wines to the capital.

Finally, standing out on the beautiful terrace overlooking an orchard of olive trees, we try a 2014 Malbec which the guide proudly tells us is one of the 50 most admired wines in the world because of the number of awards it had won. Naturally, it was absolutely delicious and I felt very lucky to be trying it. For the price of about £6 we had tried five wines in an incredible setting. 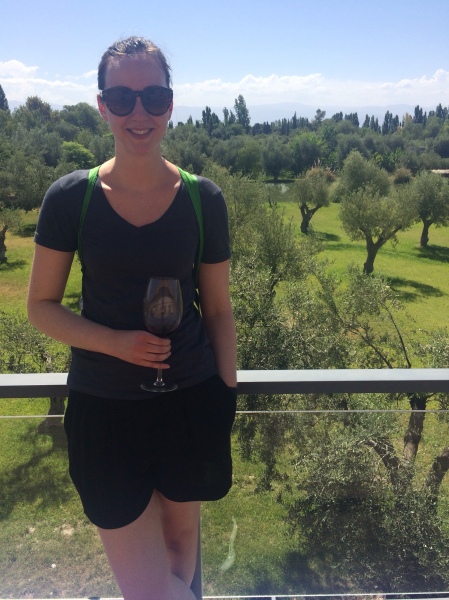 Afterwards, Moz, Davo and I decided to treat ourselves (even more!) and headed to a long, low glass building, the onsite restaurant where we sat outside and shared a bottle of the first white wine we had sampled. It was perfect: trickling water fountains, the birds in the trees above and sitting chatting in the shade. 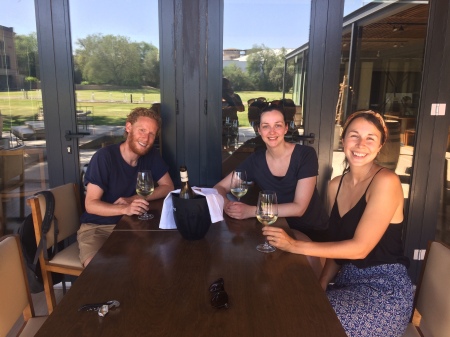 It was a thankfully short cycle back to the bike rental where we delivered our bikes and then were taken next door. The owner of the bike hire place puts of a free happy hour of his homemade wine between 5-6pm which was a lot of fun. We ended the day tipsy, possibly with a little sunstroke, but very happy! 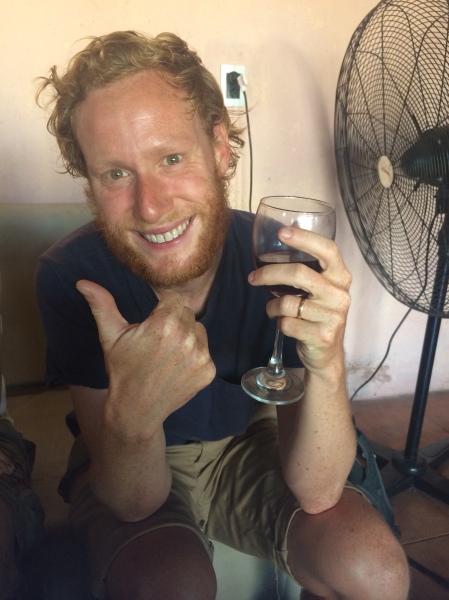 Our last day in Mendoza we headed out of the city into the foothills of the Andes. It was another scorching day and I dozed a little on the winding roads, glad to be off an hour and a half later. We were at Thermal Cacheuta, a series of natural springs, thermal baths, slides and fountains all built into the hillside. There were lots of Argentinian families and only a couple of other travellers so it felt like a very authentic Argentinian day out with lots of people watching opportunities should relaxing in the gorgeous waters get tiring.

We worked our way through the pools down the hillside and floated around the lazy river, Moz went on the slide and Davo and I became possibly the only people to have brought their books into the thermal springs. 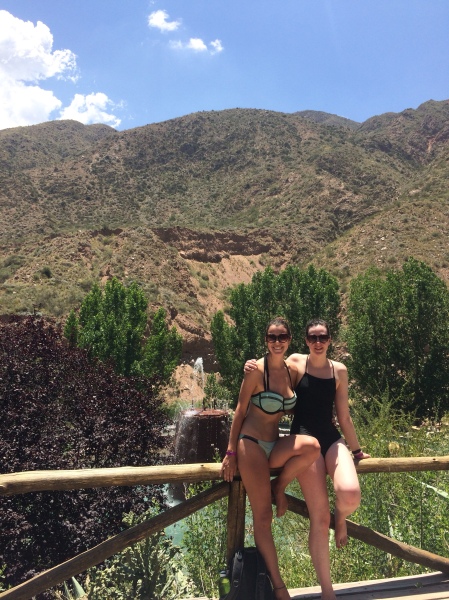 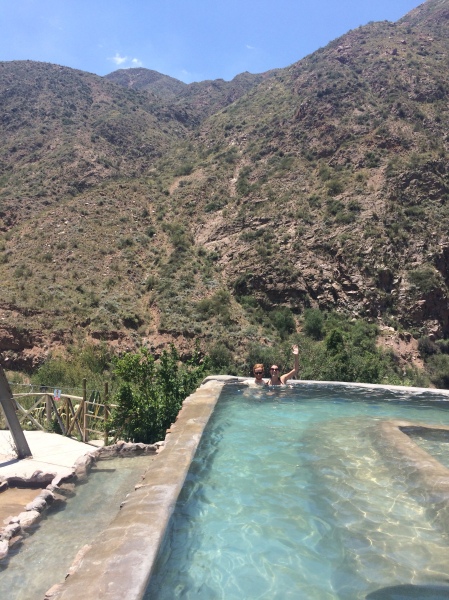 Around us were families who had set up shop for the day; coolboxes held cold beers, folded chairs were set out, huge umbrellas were erected and kids ran around shrieking. Dads with tummies stood around by the outdoor grills, flipping huge chunks of meat like it was a national sport. Smoke and delicious smells filled the air. I borrowed a knife off two old men and two old ladies sitting near us; they didn’t seem to be interested in swimming and instead spent hours eating fried corn and playing bingo all day, giving us a pice of hot, salty, delicious grilled lamb to try.

Mendoza, you were amazing!

3 thoughts on “Malbec and mountain springs in Mendoza”

Error: Twitter did not respond. Please wait a few minutes and refresh this page.